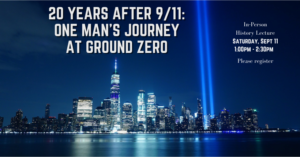 Fagel will also be displaying artifacts in the Library’s display case throughout the month of September, including: logbooks, reports, and maps.

Fagel served as a Reservist with FEMA as well as for the Department of Justice in their State and Local Programs Office of Domestic Support. Fagel served as a member of the North Aurora Fire Department for over 25 years, a member of the Kane County Sheriff’s Office as well as a Defense Department Contractor in the Middle East and stateside. Fagel also worked for the Argonne National Laboratory for 17 years in their Homeland Security and Intelligence programs.

Fagel teaches Crisis Management at Northern Illinois University, in the Masters of Public Policy at the Illinois Institute of Technology, and Eastern Kentucky University. He is senior field instructor for various Federal Programs in Homeland security, Crisis Management and Active Shooter Preparedness.

Some of his missions included the response to the Oklahoma City Bombing in 1995, Various Hurricanes including Sandy in New York City, World Trade Center Attacks, Public Heath Crisis  Events as well as 2 mid-east deployments.

He served OSHA as an SGE in their Voluntary Protection Program, and as a Federal Safety Officer for FEMA on various Missions.

His textbook, “Crisis management and Emergency Planning” earned the Textbook of the year award from ASIS in 2015. His seventh book will be published September 14, 2021, Emergency Operations: EOC Design 2nd Edition.

He has earned the Distinguished Service to Safety Award by the NSC and has served as an elected and appointed official.